How to Use the Underdog Strategy to Crush the Competition

One concern I hear over and over again from startups and small business owners is that they find it difficult to compete with other companies in their industry. The problem with their assessment is that it is rooted in the premise that business is a head to head battle of attrition.

Jiu-Jitsu uses the opponent’s force against themselves rather than confronting it with one’s own force.  Therefore, the savvy small business owner practices business Jiu-Jitsu to make the competitor’s strength their weakness.

To see how this may be applied to your business let’s first consider how land-based wars have been fought throughout history by a nation’s armies. Armies have three basic types of units at their disposal- 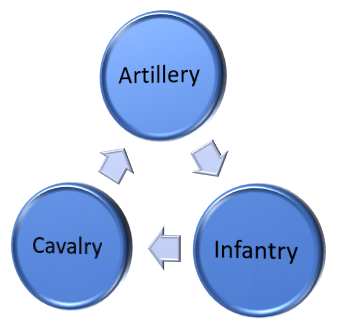 Scissors cut paper, but rock breaks Scissors. In our warfare example, the speed of the Cavalry makes it a hard target for Artillery, but slow-moving Infantry units are sitting ducks for Artillery.  Likewise, Artillery being less mobile and lightly armored is vulnerable to a fast-moving Calvary unit and a heavily armed/armored Infantry can make short work of a lightly armed Calvary.  So, Cavalry beats Artillery, Artillery beats Infantry, and Infantry beats Cavalry.

Now let’s consider the story of David and Goliath.  Goliath was big and strong, covered with heavy armor, and equipped with weapons for hand-to-hand battle. He was a super Infantryman.

David was a shepherd boy used to fighting off predators from a distance by hurling rocks at them with his sling. David was an accomplished Artilleryman.

David would have been quickly dispatched by Goliath in a hand-to-hand battle. HoweverDavid understood what I call the “Underdog Strategy”, which is that you never fight a battle to your enemy’s strengths.

David recognized that Artillery beats Infantry and volunteered to stand up to Goliath. David was small, but he fought in a way not suited to Goliath.

We know the outcome of their battle. Being bigger in a straight-up fight may give you the advantage, but being bigger also means that you are slower, which makes you vulnerable to a more agile opponent.

As an existing small business with some business acumen, you are like David an Artilleryman.  A large business is more like Goliath an Infantryman who is slow but very well armored.  Your strength as a small business is that you can take potshots at a large business competitor with relative impunity. As a startup your relatively smaller size and distance, most large businesses will not have the bandwidth to retaliate and will often just ignore you until it is too late and you have secured a beachhead.

As a startup, you are fast and light like a Calvary unit.  You possess little armor (business acumen) and are lightly armed so you are unlikely to hurt a well armored large business.  Your strength as a startup is your speed. You can inflict damage to established small business that can’t react as quickly as you and don’t have sufficient armor (business depth) to protect themselves from your blitzkrieg. However, as a startup, you remain vulnerable to a larger business with their extensive resources. If they want what you have, they often have the resources to just take it or squash you through legal means. 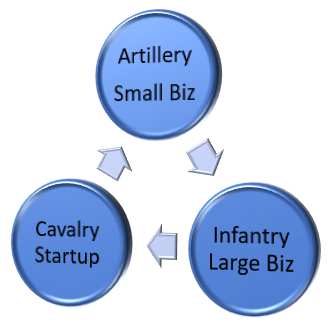 As a large business, you are like the slow but well-armored infantry.  You are best suited to either acquire or render a startup irrelevant but remain vulnerable to small businesses that can hack away at your strengths over time.

As a small business, you are like the fast but lightly armored Cavalry. You are best suited to hack away at slower more arrogant larger competitors who are so busy looking internally that they fail to realize you are a legitimate threat until it is too late.   However, you remain vulnerable to attacks from a startup that can steal your competitive advantage.

And finally, as a startup, you are like the Artillery unit where you can attack from concealed locations out of range of competitors. You are best suited to clear the road of small business competitors by leapfrogging their competitive advantage.  However, you remain defenseless against expensive legal challenges from much larger and well-capitalized large competitor.

As a business owner, you need to know your strengths and weaknesses. To survive another day is it never advisable to engage in a head-to-head battle of attrition with a peer business.  Attack where you have the advantage and keep an eye on your six o’clock to make sure you are not in the cross-hairs of a competitor that has an advantage on you.

Is your battle plan based on head-to-head encounters of attrition? Or do you fight to your strengths forcing others to adapt?