Just Do It – How to Grow an Idea 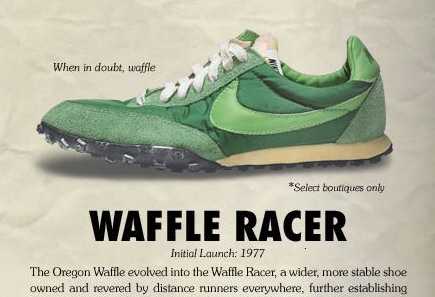 Bill Bowerman was a very successful track and field coach at the University of Oregon. Runners at the University often suffered from shin splints, leg cramps, knee, and back issues as they trained. Bill was obsessed with designing solutions to solve these problems.

One morning he was in his kitchen watching his wife Barbara make waffles. As she removed a waffle from the waffle iron. Bill took notice of the waffle’s honeycomb pattern and was hit with an idea to produce a lightweight shock-absorbing shoe heel. After breakfast, he took her waffle iron to the garage, poured in some synthetic rubber, allowed it to cool, and cut out lightweight heel wedges that could be inserted into a running shoe.

He then took them to the University and tested them out on his students. Bill knew that shaving just one ounce of weight from a shoe translated into over 200 pounds less lifting force needed to run a single mile. Convinced there were huge applications for a shoe that incorporated a lightweight honeycomb shock-absorbing heel, he contacted several shoe manufacturers. None of the companies he contacted would agree to manufacture it.

As a coach, Bill often told his students after they lost an event that “Losing can be a real beginning”. He decided it was time to take his own advice and “Just do it”, so he started his own shoe company. That company was Nike. In addition to having the courage to follow his convictions and create a new category of footwear, the running shoe, to help draw attention to his new lightweight running shoe Bill wrote a book called Jogging.

This introduced the public to the benefits of running, thereby creating a new industry. Sometimes inspiration can come from the most unusual sources. When others can’t see what it is that you see, maybe it is time to just do it. And finally, sometimes you have to write a book and show the world you’re the expert to ignite a new industry.

Where do you find your inspiration? Do you see solutions that others can’t? What are your plans to ignite a new industry around your idea?

email
Are You Reading This?Inspirational Quote from Confucius

6 years ago Lesson From Successful PeopleBranding