Knowing When to Hang On 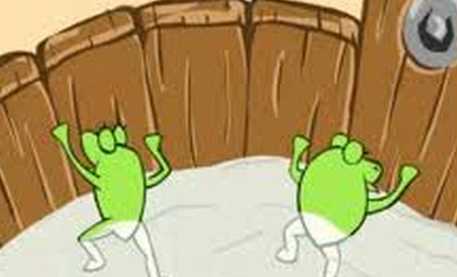 There are several times when a business’s prospects might look pretty grim. At these times, if the owner was offered a fraction of the money they had invested in the business, they would gladly take it and walk away. I know I have felt like that several times. It was a good thing I was never offered that option because eventually the climate changed and our business took off.

My father once told me a story about two frogs that fell into a bucket of cream. After a few minutes of struggling one of the frogs looked at the other and said “There is no way out. I see no point in hanging on.” The frog stopped treading cream, as it were, and slipped below the surface and drowned.

The other frog, not yet willing to give up all hope, continued to tread cream while he contemplated his next move. While he continued kicking looking for an escape, the cream got thicker and thicker until it turned into butter and he simply walked out.

The story has always resonated with me and is a reminder that sometimes, without a better option and no direct hardship, perseverance can often lead to success.

The key here was that the status-quo was neither good nor bad and the only risk was opportunity risk. In other words, things were not getting worse while you continued to hang on. If things are deteriorating then an exit may be advisable, but other times, where there are no obvious better opportunities, hanging in there may be the best option.

Is your business moving sideways rather than forward? Do you have any better options? If not, would you benefit by simply hanging on?

email
Knowing When to QuitChallenges of Creating a New Category