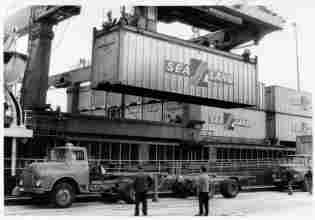 After graduating high school, Malcom McLean bought a used truck and started a small trucking company with his sister and brother. Two years later in 1937, Malcom found himself sitting in a long line of trucks on the Hoboken, NJ docks. He was awaiting his turn for the stevedores and longshoreman to unload his cargo of cotton and place the bails in cargo nets to manually load into the hold of each ship. This century-old process, known as break bulk shipments, involved manually loading and unloading cargo from manufacturer to truck, truck to ship, ship to truck, and finally, truck to destination. This process was a colossal waste of time and manpower.

As Malcom waited for his turn, he thought there must be a better way. It dawned on him that sorting and packaging goods into large containers for shipment would make the process faster, safer, and cheaper.

Years passed as he considered the idea further. By early 1950, he developed a plan to ship his entire loaded truck on a trailer ship., However, it proved impractical since the ship’s hull is curved and box trucks are rectangular, leaving a large quantity of wasted cargo space between the truck’s sides and the ship’s curved bulkheads below decks. Moreover, the cab, engine, and wheels also contributed to more wasted space.

Finally, in 1955, he revised his concept to loading just the container or box and not the truck’s chassis. Since interstate commission regulations prevented a trucking company from also being a shipping company, Malcom decided to sell his share of McLean trucking and used the money to buy the Pan Atlantic Steamship Company for the operating rights to carry containers by ship. He also bought the Gulf Florida Terminal Company, which he fitted with gantry cranes to load the containers on to ships. He then secured a loan to purchase two WWII tanker ships, which he extensively modified to carry containers both on and under the decks.

In 1956, the cost to load and unload cargo from ships employed thousands of stevedores and longshoremen, costing an average of $5.86 per ton. With McLean’s new containerized shipment, it cost only 16 cents per ton or less than 1/36th the cost. Not only did it cost less to load and unload, it also took much less time. Since ships and trucks only make money when they were moving, trucking and shipping companies loved the idea and the Sea-Land Company was born.

McLean took almost 18 years to realize his idea. He continued to use his trucking company to generate the profits he could later use to build the Sea-Land Company. The technology of containerized shipments displaced an entire industry of dock workers who were not happy.

How can you use the lessons from Malcom McLean and apply them to your ideas and business?

email
Barbie, Seeing Things Others Do Not - Business Lessons From Elliot And Ruth HandlerServing Economic and End User Customer Segments

5 years ago Lesson From Successful People