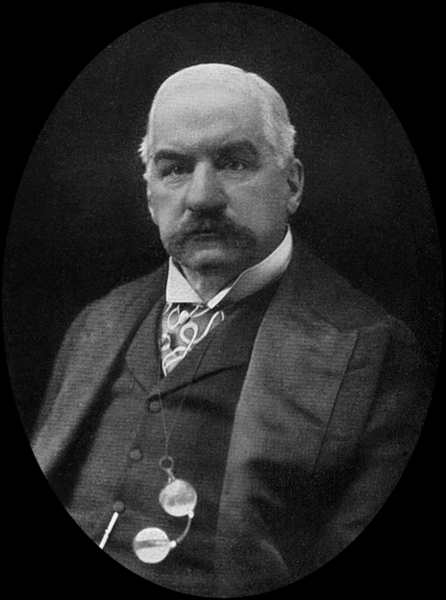 JP Morgan benefited from the best education money could buy. His father was an international banker, but he had a strained relationship with his son throughout his life. After high school, his father sent him to the best schools in France and Germany before setting his son up in his banking empire.

JP Morgan learned at a young age that to make money you had to invest other people’s money. As the head of the most powerful banking house of the world, JP Morgan was focused on the reorganization and consolidation of distressed businesses.

When the financially troubled railroads fell on hard times after the crash of 1873, JP Morgan bought many of them, consolidated them, and reorganized their business structures and management in order to return them to profitability. He became so proficient at it that the process of taking over troubled businesses to reorganize them became known as “Morganization.” His reputation as a banker and financier also helped bring interest from investors to the businesses he took over. However, he became restless and when he turned 40, he felt the need to get out from under his father.

He saw what JD Rockefeller and Andrew Carnegie had done building their companies from the ground up and he wanted to do the same even though it was against his father’s wishes.

Morgan knew it would take innovation and he took notice of an inventor named Thomas Edison. He wanted to invest in Edison’s electric light business because he saw the potential of the electric light.

To attract other investors, he had Edison install 400 electric lights in his New York home on 5th Avenue. He invited many of his wealthy friends to visit his home to demonstrate the electric light. JP Morgan’s father disapproved, but the event was a success. The demonstration made JD Rockefeller take stock in his own business as the Kerosine his company was built upon would soon be eclipsed by the electric light bulb. JP Morgan made the decision to fund Edison’s idea and built a power grid to electrify half of New York City. Every home electrified by Edison was a lost customer for Rockefeller. In an effort to protect his Kerosine empire, Rockefeller launched a media campaign to discredit electricity.

Edison’s electricity transmission was based on Direct Current (DC), which anyone that has installed a car stereo amplifier knows that to transmit DC power without significant transmission loss requires the use of expensive heavy copper wires. Nicola Tesla, Edison’s apprentice had discovered Alternating Current (AC), which overcame the transmission issues associated with DC. Tesla tried to influence Thomas Edison’s thinking and encourage him to switch to AC.

However, Edison’s ego kept him from seeing the value of AC and he continued to focus on DC as the source of power for his electric light. Both Edison and Tesla were idea people, but terrible business people. Frustrated by Edison’s lack of recognition for his ideas, Tesla finally accepted an offer from George Westinghouse, an inventor, and engineer in his own right, to invest in Tesla’s AC idea.

This set up what was known as the “Current War.” JP Morgan put pressure on Edison to discredit AC and protect his investment. Edison agreed to set up demonstrations using AC to electrocute animals to show people that AC is an unsafe way to transmit electricity.

After this demonstration, prisons looking for a more humane way of killing death row inmates contacted Edison. Edison saw this as a great demonstration to discredit AC and devised an electric chair using a Westinghouse generator and alternating current.

The first execution by electrocution took eight minutes and essentially roasted the man alive. People were horrified by the display and the stunt backfired on Edison who was forever associated with it.

JP Morgan’s father ordered JP to divest himself of the electric industry, but JP hesitated, knowing that a large power plant in Niagara Falls was being built. However, it was not clear if the contract would be awarded to AC or DC power. As he tried to make the decision to either defy his father or not, his father died in an accident and JP inherited his father’s vast portfolio of investments. To hedge his bet of winning the Niagara Falls contract, he organized a smear campaign to trigger a sell-off of Westinghouse stock when Westinghouse was drowning in debt.

The smear campaign left Westinghouse on the verge of ruin and unable to raise new money. JP Morgan was convinced his plan had worked and that Westinghouse was out of the picture and he would be a shoo-in to get the Niagara Fall power plant contract. In a turn of fate, Tesla volunteered to void his royalty agreements with Westinghouse, giving George full control of the AC invention and with it the power to raise new money.

In a show of power, Westinghouse under bid JP Morgan to light the upcoming World’s Fair in Chicago with AC lights at 1/4 the price of Morgan. Westinghouse won the bid easily. When they flipped the switch at the Chicago World’s Fair, 200,000 lights came to life in a spectacular display. The world saw the power of AC and the Niagara Falls power plant contract was awarded to Westinghouse.

Even though Morgan and Edison lost the bid, JP Morgan saw a way out. He told Westinghouse he would sue for patent infringement since Nicola Tesla was working at Edison Light when he discovered AC technology.

With the huge financial resources at Morgan’s disposal, Westinghouse had no other option but to hand over the patents to Morgan. Morgan then bought up all the shares in Edison General Electric to marginalize Thomas Edison and renamed the company General Electric (GE). With Edison out of the way and the AC patents in hand, JP Morgan realized his dream of owning the electric industry and built GE into a powerhouse.

Below are 7 business lessons that small business owners can take away from JP Morgan’s success as a businessman.

What lessons from JP Morgan can you apply to your business?

email
Entrepreneurial Journey - 11 Powerful Lessons I Have Learned from BandsSmall Business Advice – Pick of the Week May 1st, 2021

13 days ago Lesson From Successful PeopleBanks, Innovation, Titans of Industry151