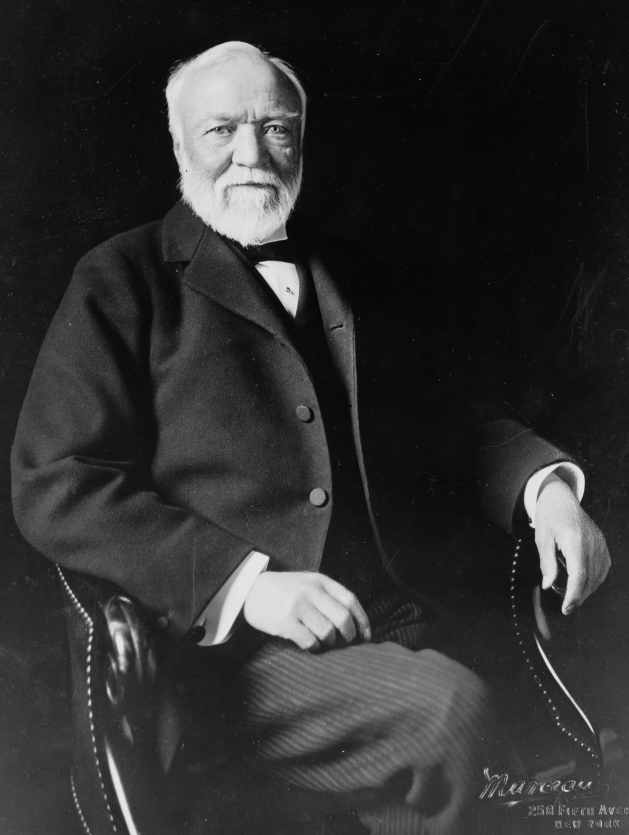 Andrew Carnegie grew up poor like JD Rockefeller and was forced to go to work at age 13 to support his family. Although Carnegie had little formal schooling, he was very bright. When he was 15, he got a job as a telegraph messenger.

By 18, he got a job as a telegraph operator with the Pennsylvania Railroad and met Thomas Scott who took the young Carnegie under his wing. The confidence that Scott showed in Carnegie bred confidence in Carnegie himself.

All bridges up to that point were made of either wood or stone, neither of which would work given the unsupported distances involved to allow steamships to pass. Iron was the metal of the day but was not strong enough either. Yet steel, which mixes iron with carbon, was strong enough but very expensive. To make a single steel rail took 2 weeks. However, in the summer of 1872, Carnegie learned of a scientist in England by the name of Henry Besimmer who had devised a technology that could produce a steel rail in just 15 minutes.

At 33 years old, Andrew Carnegie was poised to build the first bridge across the Mississippi River using steel. However, using steel delayed the project by two years, and the project was flooded with debt. When the project’s funds were exhausted, bridge construction was forced to stop. The difference between those that succeed and those that fail is what they do when faced with adversity. Carnegie believes in the project and was all in person. He would not give up and continued to search for investors. His perseverance finally paid off and he was able to secure the additional funding to complete the bridge.

On a summer day in 1874, the bridge was completed. However, people unfamiliar with the strength of steel feared that the bridge would collapse. Ever the showman, Andrew Carnegie employed an elephant to lead a procession of individuals across the bridge.

Knowing that steel would revolutionize the construction industry, Carnegie went to his mentor Thomas Scott to help him raise the capital needed to build his own steel plant. His steel plant would be based on the blast furnace technology invented by Henry Besimmer in England. As the plant was being built, the 1873 crash hit and crippled the railroad industry. When the plant was completed 2 years later in 1875, Carnegie needed to make sure he had the customers to buy his steel, so he named the plant after Edger Thompson, Thomas Scott’s partner and president of the Pennsylvania Railroad. By doing so, he won a huge contract to produce steel rails for the Pennsylvania Railroad.

A few years later, his lifelong mentor Thomas Scott died and Carnegie blamed JD Rockefeller for the death of his mentor and for the 1873 crash that hurt his biggest customers, the railroads. However, there was an unexpected consequence of the crash. With the crash, people flooded into the cities looking for food and work. With demand for railroad steel waning, Carnegie saw an opportunity to provide structural steel to build high-rise buildings. Soon steel became the single major component that made the construction of skyscrapers possible.

Carnegie was motivated by revenge to surpass the wealth of JD Rockefeller. Carnegie hired Henry Frick, a former coal baron who was merciless in his business dealings. The personalities of Carnegie and Frick were polar opposites. Carnegie didn’t have the stomach to be a ruthless businessman, but Flick did. As a first mover, Carnegie Steel had the ability to press their advantage and Frick was the man to make that happen. Through the use of intimidation and fear, Frick was able to buy out their competitors and grow Carnegie Steel, which pleased Andrew Carnegie. Carnegie promoted Frick to the chairman of Carnegie Steel, but Frick had his eye on a bigger prize: Carnegie’s job.

To gather support from rich and powerful partners to assist him on his quest to oust Carnegie, Henry Frick created an exclusive men’s club for the rich and famous. This club was on a lake created by the South Fork dam upstream of Johnstown PA. Engineers told Frick that the dam needed to be strengthened, but Frick was in a hurry to gain influence and ignored the pleas of the engineers and the residents of Johnstown. Moreover, Frick wanted the road on top of the dam widened so motorists could travel across it. However, the only way to do that was to lower the dam which they did.

On Memorial Day 1889, it began to rain. The water level in the lake rose by 1 inch every 10 minutes and a dam breach looked imminent. Even though a warning was sent to the residents of Johnstown, most simply ignored it as they had seen other storms raise the water level with no consequences. Yet that was before the top of the dam was lowered to accommodate Frick’s road. The dam broke, sending a torrent of water down the valley toward Johnstown. Over 2,000 people were killed and it was the worst man-made disaster until 9/11.

While Carnegie was a member of the club, it was Frick’s actions that created the situation. The event however forever changed Andrew Carnegie since he felt responsible and his brand was forever tarnished. Andrew Carnegie donated millions of dollars to rebuild Johnstown. He wanted to be remembered for the good he had done. He began to give away his money to build libraries and his crown jewel, Carnegie Hall, in New York City.

Carnegie renewed his rivalry with Rockefeller and knew he needed profits to become richer than Rockefeller. He built new steel plants and to keep costs down, he cut each worker’s pay and demanded that they work longer hours. He turned again to Frick to do his dirty work and left for Europe as he was prone to do to think and take stock of the industry away from the day-to-day operations. Frick instituted 12 hour days and a 6 days a week work schedule. There were no labor laws at the time so a group of workers decided to raise their concerns and organized a labor union. In June 1892, a worker died in an industrial accident at a steel plant, which galvanizes the other workers. Frick proclaimed that Carnegie Steel did not recognize the union and said that Carnegie Steel would not negotiate with its workforce. A strike ensued.

Two thousand workers barricaded themselves inside the front gates to avoid scabs from replacing them. Undaunted, Frick called in the Pinkertons, which was essentially a group of hired guns to break up the strike. Frick thought the sight of the armed Pinkertons would make the workers come to their senses and give up the strike. The workers stood their ground. Events continued to unfold and 9 workers were killed. Countless others were injured, but the workers continued to hold their ground. The governor of Pennsylvania was forced to send in the state militia to restore order. Frick was held personally responsible for the killing and maiming of the workers by the employees of Carnegie Steel. An attempt was made by one of the workers to kill him.

Hearing the news of the killings, Carnegie returned from Europe and his relationship with Frick reached a breaking point. Frick told Carnegie that he should be head of Carnegie Steel since he did all the dirty work and even took a bullet for this effort. In public, each blamed the other for the misfortunes that were befalling Carnegie Steel. At this point, JP Morgan entered the scene. JP Morgan was a financier who bought up failing businesses and returned them to profitability through consolidation. With all the issues facing Carnegie Steel, Carnegie was sure that Carnegie Steel was JP Morgan’s next target.

To avoid this misfortune, Carnegie decided to make a bold move and removed Henry Frick. Andrew Carnegie vowed to return Carnegie Steel to its former greatness. As was the case with RD Rockefeller and the advent of the internal combustion engine that breathed new life into Standard Oil, the Navy recognized the value of steel and submitted orders for steel warships to be constructed by Carnegie Steel. This made Carnegie Steel one of the first defense contractors and breathed new life into Carnegie’s empire when he needed it most. This new contract also averted a power struggle with JP Morgan for the time being.

Below are 11 business lessons small business owners can take away from Andrew Carnegie’s success as a businessman.

What lessons from Andrew Carnegie’s life can you apply to your business?

email
Why You Need to Beware of The Planning FallacySmall Business Advice – Pick of the Week April 24th, 2021

20 days ago Lesson From Successful PeopleFunding, Innovation, Titans of Industry578