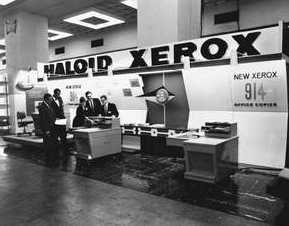 Many local ecosystems have initiatives and programs to foster innovation in their own community as a way to grow new technology or manufacturing companies. They do this in the hopes it will bring in new money as the primary employer grows to maturity. However, sometimes it is not the product that generates the revenue, but a new economic model that makes a business viable and become a primary employer.

Take for instance the case of Chester Carlson. He invented the process of electrophotography which is known as photocopying today. However, the copier technology was not sufficient to be marketable. In fact, Chester attempted to make electrophotography a viable business, but met with a long history of failures.

John Dessauer, Chief of Research at the Haloid Company of Rochester NY, read an article about Carlson’s invention and licensed the technology. Haloid was a manufacturer of photographic paper and was looking for a way to reinvent itself.

Haloid changed its company name to Xerox and went on to produce the first commercial photocopier known as the Xerox Model A. He also later produced the first plain paper copier known simply as the 914. However, because photocopy machines were very expensive, sales remained poor. In the end, neither the technology or the manufacturing capability produced much economic value.

Can you change your economic model to capture a greater share of your market?

Be sure to sign up for our free email delivery so you can get future inspirational blog posts deliver directly to your email each morning.

Also sign up for our daily Podcast on iTunes, Stitcher, and Player.FM.

email
Ecosystems: Primary vs. Secondary Employers - Why You Need to KnowKeurig's New Business and Economic Model