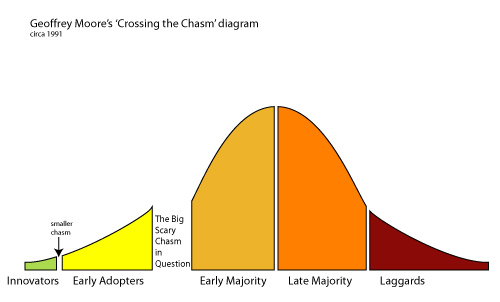 According to professor Everett Rodgers in his book “Diffusion of Innovation“, he says that there are five categories of adopters.

The five adopter categories divide consumers into segments based on their willingness to try out a new innovation or product. The following post looks are each of the five types of adopters in a bit more detail.

The five types of adopters include:

Of the five adopter categories, individuals in the category represent only about 2.5% of users.

Innovators are technology enthusiasts that are willing to take risks on a new offering. Generally, they have a high social status and are often considered mavens in their space or industry.

Of the five adopter categories, Innovators have a high degree of financial liquidity to absorb failures and a high-risk tolerance that allows them to adopt new technologies that may ultimately fail.

They are connected socially to engineers and technology and they often interact with other innovators.

Of the five adopter categories, individuals in the Early category represent about 13.5% of users.

They are visionaries and opinion leaders in their space or industry.

Early Adopters have a high degree of social status that allows them to influence others based on their opinions. They are more likely to spread the word than Innovators with their followers. Early Adopters are a bit more discerning in their adoption choices than Innovators as a way to help them maintain the central communication position they enjoy.

A major pivot by companies is necessary to refocus the marketing message to cross from Early Adopters to the Early Majority that comes next.

Of the five adopter categories, individuals in the Early Majority category represent about 34% of users.

While the Early Majority has above average social status and contact with Early Adopters, they seldom are opinion leaders.

Of the five adopter categories, individuals in the Late Majority represent about 34% of users. The Late Majority adopt an innovation much later in a technologies maturity cycle.

Late Majority individuals approach an innovation with a high degree of skepticism and adopt the innovation only after the majority of society has already accepted it.

The Late Majority often has little financial liquidity so their risk tolerance is low and they are not in a position to influence others.

Of the five adopter categories, individuals in the Laggards category represent the final 16% of users.

Laggards are dead last to adopt an innovation. Laggards typically have an aversion to change, tend to focus on “traditions,” and generally are only persuaded to adopt a technology by close friends and family.

To achieve success, a business must first run tests with Innovators and Early Adopters to refine the product’s offering. Then they need to run additional tests with the Early Majority to find how best to enter the mainstream market. Each of the five adopter categories of users requires a different marketing approach to win them over.

Do you consider the unique attributes of the five categories of adopters as you market and grow your business?