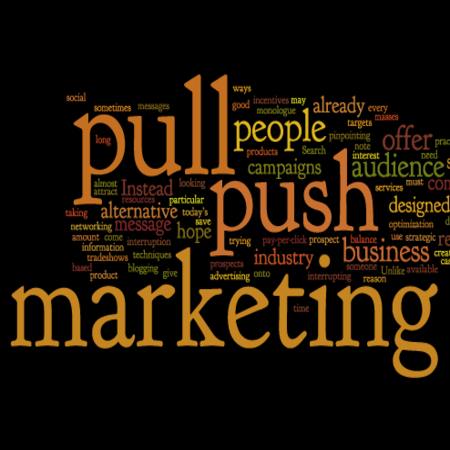 Pull Marketing Creates an Environment of Cooperation Between the Buyer and The Seller. Push Marketing Is Endlessly Bugging Prospects.

In a recent conversation, a B2B sales rep told me something to the effect: “I hate my job because no one wants to talk to me. They don’t answer the phone, they don’t return my voice messages, and they almost never respond to my emails.” He also mentioned the fact that his sales cycles were getting longer, more people were involved in each deal and the entire process was more contentious. Other than that, everything was great (just kidding on this last part!).

This sales rep happens to be a nice person, but being nice is not much solace when you are working in a system that is set up to be adversarial and often painful. The model his company employs is called “push marketing” and the idea is to find out where the suspects are and push our way to them. The opposite end of this spectrum is what my company, Fusion Marketing Partners, practices, “pull marketing”.  Pull marketing is inbound focused – the idea is to get prospects to come to you.

Charles Green wrote a very interesting article about this titled, If Selling Is Too Hard, You’re Doing It Wrong. He talks about how much of selling is a competitive struggle between buyer and seller: “When we think this way, we spend an awful lot of energy. It’s hard work—particularly because much of it is spent trying to persuade customers to do what we (sellers) want them to do. And getting other people to do what we want them to do is never easy (if you have a teenager and/or a spouse, you know this well).

I’ve seen sales training where reps are encouraged to use aggressive and high-pressure tactics on prospects. This is definitely a push model. From a marketing perspective, push tactics include cold calls and emails, overly forceful sales letters, and unsolicited pitches. LinkedIn has become a hotbed for aggressive sales tactics and this has caused many otherwise open networkers to be much more careful about accepting new connection requests.

Pull marketing is a great antidote to this competitive struggle because you are more often dealing with prospects who already have expressed an interest in what you are offering. Instead of hiding, they are more likely to accept the attention of a sales rep. The process becomes one where you help them buy instead of trying to sell them something. After all, most people like to buy but few of us enjoy being sold. A pull-oriented, buyer-centric marketing and sales model is more pleasant (and productive) for both the buyer and the seller.

Following are some of the characteristics of the push vs. pull models.

By the way, there are often instances where we can’t find enough pull traffic to fill the sales pipeline and we then use some push marketing methods to meet lead and revenue objectives – adding push marketing tactics over time. At the end of the day, pull marketing creates an environment of cooperation between the buyer and the seller so reps feel like they’re contributing to a win-win outcome, not endlessly bugging prospects who have no desire to talk. B2B sales reps (like the friend I mentioned above) love this change in marketing strategy because they see an easier, more enjoyable and more profitable light at the end of the tunnel.

Guest post by: Christopher Ryan CEO or Fusion Marketing Partners and Center for Business Modeling. Chris is a SCORE colleague and a marketing and sales maven. We are super fans of each other’s work.  The post originally appeared on his blog in April of 2018 and is reproduced here with the author’s permission.

Christopher Ryan CEO or Fusion Marketing Partners and Center for Business Modeling. Chris is a SCORE colleague and a marketing and sales maven. We are super fans of each others work.