VIDEO: Why You Need to Conduct a Break-Even Analysis 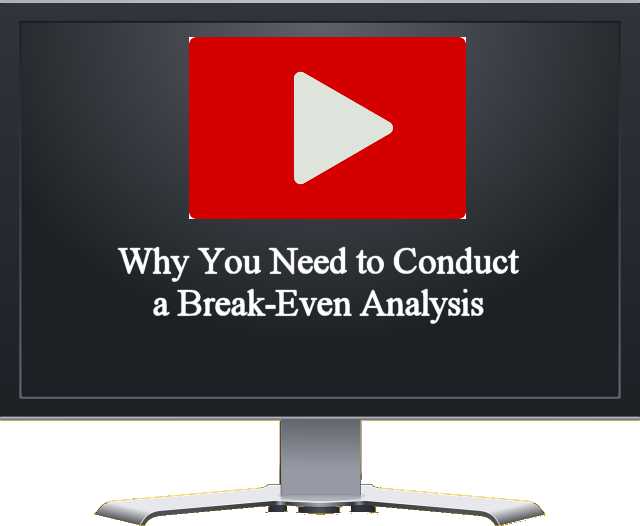 A break-even analysis is a technique used by business owners to assess how many units and at what price they need to sell them at to make a profit.

The analysis takes into account the fixed and variable costs of a business as well as the sale price to determine the break-even point.

The business owner can also use a break-even analysis to determine the specific break-even point when it is better to buy or lease equipment to profits.

Here is a link to a free Break-Even Analysis Template.

Break-even analysis. I want to talk about this. I want to drill down a little bit more because this is a, has a lot of salient messages in there for you, so every business has what we call. If you take all the expenses, we have what we call fixed expenses and variable expenses, a fixed expense, something that happens every month irrespective of whether you make the sale or not, your rent payments, your phone bill. Those are kinds of things that happen every month whether you make a sale or not. If you have a retail establishment, the clerk that’s sitting there at the cashier is a fixed expense because you have to pay for that clerk whether you’re anybody comes in through your door or not. We also have variable expenses, so if I use the example of a retail business, every time I sell a product, I got to replace the product.

Those are variable expenses. Unless they sell that expense, I don’t have the expense to replace that product, right? If I have a services business and I hire contractors, do the work, see story time. One of my first forays in the business was an invisible fencing business. Now, many of you probably know what invisible fencing is, but I can tell you what, when I was involved with the company, there were two years old. They had a patent, so we were the only ones that could talk about invisible fencing and quite frankly, I spent a huge amount of money on customer acquisition costs because my customers had no idea. They, as soon as they thought about keeping Fido in the backyard, they thought of two solutions, chain link, fence dot k fence. That was it. They didn’t know that they had this other option. Remember the gain points?

I hit a gain point, but they didn’t know that they had a game point. I had to educate them that there was such an option. All right to go do that. So, but my, my, my deal here is what we have is we have fixed expenses and we have variable expenses, right? And now I would only have to buy an invisible fence. Now this is what’s interesting about this particular franchise because I paid every time I bought a system. It not only included the hardware, but all the variable expenses that had to go back to the parent company. And then the rest of it was margin for me to deal with that I could now spend on customer acquisition costs. I didn’t have a whole lot, lot of the marketing was done at a national level, those kinds of things to be able to do that.

So I had a very large variable cost, but not a lot of fixed costs to be able to go do that. So the point is, this is tale of two different businesses and you don’t need to be able to read the scale here. But what happens is we think about this in a term of a month. We know that our fixed expenses are comprised by this blue line here. So we know that we’ve dug ourselves a hole in the beginning of the month because we had to commit these funds to bills that we have fixed expenses. But every time I sell a unit, units are on the bottom dollars around the side. Again, you don’t need to read the scale. Every time I sell a unit, it’s going to cost me a little bit more to buy that, but I also have the retail price of my product or service that represents this yellow wine and at some point, they cross over.


So if I only sold this many units, one could argue I’m going to, I could take a look at the gap between these two lines and I could make a determination that says that quite frankly, we used it on the scale here. This is how much money I’m going to lose because everything in this triangle is a loss. Everything in this triangle is what we call profit or margin at this point, okay? Now the reason I have two of these on here is because sometimes like my invisible fence story, I can trade my fixed expenses for some variable expenses. So I start out with a much lower number. So think about that construction company. Don’t buy that backhoe, rent it. Now when you rent that backhoe, it’s going to cost you a lot more money than if you owned it, right? But if I didn’t have any business that month, I don’t have that expense.


So that becomes a variable expense. Whereas if I own net backhoe, I have principle and interest payments, which are fixed expense, right? So, here’s the, here’s the salient part. If I still had sales down here, it was only halfway to my break-even point. This is how much I lose. Would you rather lose this much or that much? You’d rather have the right side, wouldn’t you? So, here’s the important thing. Two things happen here. One is how much of my fixed expenses can I control? Not very much. How much of my variable cost can I control? Not very much because they’re dictated by other people. What I can control is what I sell my product or service for. So I can control the slope of this yellow line. So, if I, if I make it more expensive, I, my crossover point comes quicker. But it made, now I need to understand the marketing piece, which is what we’ll talk about in a minute to see if the market will bear that particular price.

So you don’t have much. I don’t have much control over the expense side, but I can control what I charge my product at. All. Right? The second part of that message is don’t over commit member that contingency principle. Don’t affordable loss rent before you buy because you don’t want to own something that’s unemployable later on. Nobody wants to have a laser cutting machine if that’s your going to be your business. See if you can’t rent a space if you want to open up a kitchen for example, before you go ahead and buy and build your own commercial kitchen, go ahead and lease a commercial kitchen and use theirs. Once you start getting the traction and you exceed your break-even point, we no longer want to be in this model anymore because again, if I’d sell up here, this is how much money I make, the profits I get, I would rather have that profit. So, by understanding where my break-even point is going to make a determination again and whether I should buy or rent. Because once I get to the consistently exceeding my break-even point, I want to be in this model before I reached my break-even point. I want to be in that model. So more variable costs are better in the beginning. Less variable costs are desirable. Once you get established and you start grading cashflow. Does that make sense? It’s kind of an interesting topic. All right. We’ll call that operating leverage.

Mar 29, 2019Steven Imke
How to Improve Your Odds of Success by Conducting a PESTEL AnalysisSmall Business Advice – Pick of the Week March 30th, 2019